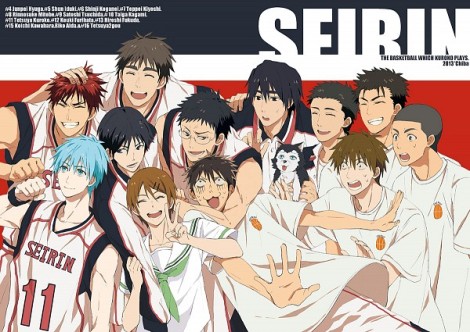 Hello, readers! It’s been more than a week since my last post, so I was itching to write on something. 🙂 And just when I decided to write about another matter, I was greeted with the news that you see in the title of this post.

To put it simply, Kuroko no Basuke manga by Fujimaki Tadatoshi will end on September 1st, in the next issue (2014 Issue 40)! With a total of 276 chapters, it’s just one chapter shorter than its shounen-basketball predecessor, Slam Dunk.

I used to be a big fan of the series, both anime and manga. Today, I can’t say 100% that I still am a KnB fanatic, but my love for the series still lingers even if I don’t shout it out to the world like I used to do.  Thus, a news like this and has something to do with a franchise that is still a part of my anime love, catches my attention.

I immediately started to read the manga right after watching the first episode of the anime 1st season. That was more than two years ago. I couldn’t stop reading the manga, which started with a pretty decent art but even by then, it was already well written. It was entertaining to see the great improvement in the art in the span of less than 100 chapters. I love the characters and the story.

What made KnB one of the most-loved manga and anime in this era is the great mixture of personalities in the characters, the wonderfully written and carefully told stories, and the balanced blend of sports drama and comedy. Fujimaki-sensei is surely a genius at this, especially since this is his first published work. Even serious threats couldn’t stop him from creating this majestic manga. I look forward to his next work. But before that, I need to begin picking up the KnB chapters that had piled up.

10 responses to “Kuroko no Basuke manga to end very soon”