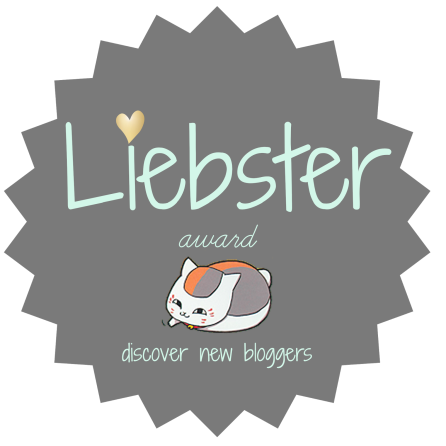 So, AniRa just received a Liebster Award nomination! Anime RAIFU is now a beloved blog~ I and Nyanko-sensei are grateful!

This is not the first time I’ve heard about this award. Even before I started blogging, I’ve read some blogs and some of their posts had this Liebster award. It must be so nice for your blog to be noticed and appreciated by other people. 🙂 Thank you very much to Sakura Namikaze of The Winter in my Soul! I don’t know how exactly you discovered my blog, but I’m guessing it was because of ariacross. This is my first time to receive such award and it feels great to be officially, though arbitrarily, welcomed by another blogger in the blogosphere~

The Liebster Award is not an official award, since there are no judges or standards that determine which blogs/bloggers to receive this recognition. It apparently originated from a German blog, which makes sense from the name of the award itself; Liebster means dearest or beloved. I personally think it’s a very nice way of recognizing and helping fellow bloggers to gain a wider readership and to connect with other fellow bloggers.

There are several variations to the rules of Liebster award since different bloggers have also modified the original rules (which I do not know) as the award is being passed on to other bloggers. Basically, alterations wouldn’t be avoided since a wide array of people have received and passed along this chain letter-ish award. There are certainly no curses in this chain, it’s a simple and happy way of recognizing others and being recognized by others.

There are many chains and webs created by this award, getting many bloggers involved in this huge blogosphere network. Some people have refused to pass along the baton, but the majority has kept the race running. I was waiting for an opportunity like this, so I am honored to be able to write a Liebster award post! I am more than willing to keep this tradition alive, and for now, I’ll try to follow the rules. 🙂

These are the 11 questions I needed to answer:

I don’t particularly like either of them, but I prefer a sunny day over a rainy day simply because it’s favorable and convenient for me especially when I travel, commute to school, go out to buy stuff, but the heat can really be painfully annoying. Sometimes, I also prefer rainy days especially during the hot and humid season, so that the surroundings will cool down, plants and trees will be watered (preventing them from wilting to death), and I would just cuddle in my bed.

Not a word, but a question: “Is it clean and safe enough to drink?”

What is a “difficult” person? The answer is different from person to person. For me, a difficult person is (a) someone who only talks and talks and doesn’t listen to the person he/she is talking to, more especially if all he/she talks about is complaints, rants, celebrities’ lives, rumors; (b) someone who thinks very highly of himself to the point that he doesn’t consider the suggestions or corrections of others; or (c) someone who is insensitive and blindly enthusiastic especially around sad, lonely, or depressed people.

So how do I deal with such person? Theoretically, I will confront him and tell him I’m uncomfortable with how he behaves with me. Unfortunately, I’ve never done that! I’ve only run simulations in my head, but never really able to tell those people off.

Funny things make me laugh! Hahaha. Okay, honestly almost anything can make me laugh, as long as I am in my “laughter” mode or the switch is flipped in my head. Yes, I have those moments when I reminisce some of the funniest memories and I would just laugh or snicker on my bed in my room or in the corner of the classroom while the instructor is teaching a new lesson.

I especially appreciate puns (Filipino, English, and Japanese) and even real-life bloopers!

Hmmm, I think I’d really like to meet Jose Rizal in person. I am forever amazed by his genius, which made ladies from different parts of the world fall in love with him. I’d like to have an intellectual discussion with him, though I doubt I’d be able to say anything to him except for the mishaps in the country. I can imagine him doing a facepalm.

I think I would like the power to read minds of others, the kind of mind-reading ability that can be fully controlled. I can choose whose mind I’ll read at any time. That would greatly help me know what other people are thinking , which would open doors to visions and perceptions that I alone would not be able to see.

That would be the dream that we finally get out of this mediocre standard of living. I want to give my parents an easy life and assist my cousins, nephews and nieces finish their education. I also dream of treating random strangers to lunch. I’m still a student, so working my way out of deprivation is still a long road I need to take.

I would like Nano to sing me. I find most of her songs as reflections of my life, so listening to them gives me strength and reassurance that I am not alone. So being sung by nano would feel natural for me.

I don’t know if they’re really taking it seriously, but I sometimes feel that not all of them are–that they are just doing it for the sake of publicity and nothing else. I don’t think highly of trends like this because these are the type of things that are taken to the extremes: the extreme of taking it seriously and the extreme of taking it as a joke. And isn’t it ironic that people who did the ice bucket challenge did it in order to run away from the compulsory donation? It defeats the purpose of sincerely donating money for research on the subject. In the end, the ALS ice bucket challenge still seems a mere publicity stunt by those who don’t send a penny.

Somewhere in Europe would be nice. Choices include the Netherlands, Scotland, United Kingdom, Ireland, and Italy. And if I would choose a location, it would be somewhere far from the city, somewhere only mountains, blue sky, free animals, and tall trees would be seen (aside from other neighbors and houses).

I normally bathe once in a day.

11 Random Facts about me

My nominees for the Liebster Award are the following people/blogs~

League of Anime | Prede’s Anime Reviews | Thoughts of an Otaku

And these are my questions for you 🙂

These are the rules that you have to follow, if you want to follow the rules, lel.

The Official Rules Of The Liebster Award
If you have been nominated for The Liebster Award AND YOU CHOOSE TO ACCEPT IT, write a blog post about the Liebster award in which you:
1. thank the person who nominated you, and post a link to their blog on your blog.
2. display the award on your blog — by including it in your post and/or displaying it using a “widget” or a “gadget”. (Note that the best way to do this is to save the image to your own computer and then upload it to your blog post.)
3. answer 11 questions about yourself, which will be provided to you by the person who nominated you.
4. provide 11 random facts about yourself.
5. nominate 5 – 11 blogs that you feel deserve the award, who have a less than 1000 followers. (Note that you can always ask the blog owner this since not all blogs display a widget that lets the readers know this information!)
6. create a new list of questions for the blogger to answer.
7. list these rules in your post (You can copy and paste from here.) Once you have written and published it, you then have to:
8. Inform the people/blogs that you nominated that they have been nominated for the Liebster award and provide a link for them to your post so that they can learn about it

That’s it, mates! Thanks for reading through!

23 responses to “AniRa is a Liebster Blog!”