This post is an entry to the 30 Week Anime Challenge series of posts. 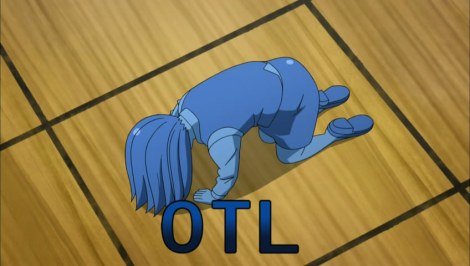 I am still alive, yeah

First of all, I apologize for the late post for third week of this challenge. I usually post in Friday/Saturday (taking into account the difference in time zones). Because of how hectic the previous week had been, I wasn’t even able to sit on my chair to write some posts I’ve been planning to write for a long while now. Although the next weeks will surely get busier than the previous weeks already were, I decide to sit down for good and answer what was left unanswered.

Anyhoo, it has finally dawned on me just how slow this kind of scheduling is, but I decided this for myself and am compelled to see to it. Twenty-seven more weeks. That’s long. I’ll just think of this as a weekly 30-ish episode anime. Yep. I’m used to dragging things anyway, though it is certainly and absolutely not because of lack of motivation. But I do not hide the fact that I tend to be lazy at times or that I am too absorbed by my real life problems and circumstances I have to deal with. After all, I’ve got life outside anime (and if I’ve got much free time, I even rant, err, blog about the happenings in my life).

This challenge is like a difficult exam, to be honest

To be honest, I was quite unsure of how to go about this question. The words “Most Underrated Anime” are rather vague. Underrated means underappreciated or underestimated, and if it is attached and used to describe something, it just means that something is generally regarded much lower than it could have deserved. That could also mean that even though the majority see something as crappy, there is the minority who might have found it praiseworthy. The word itself is already subjective as we see, watch, interpret, and enjoy things differently. Our tastes are widely varied that as many anime come out, we—the watchers—also have varied approaches to appreciating/bashing the works. And that is why there is a spectrum of love-hate discussions over particular pieces, engaging lovers, haters, and even the neutrals.

If I take the phrase too directly, it can only mean that I just have to present the most underrated anime, in the most literal way or as the phrase itself means to imply. Meaning, I can go browse any anime ranking website, e.g. MAL, and sort all of the finished airing anime according to score, with the lowest score being on top of the results, and check if I have watched the series and if I genuinely appreciated and enjoyed it. I mean, scores are the quantitative representations of how something was appreciated. But, heck, that isn’t even an accurate method of answering the question since ratings and my personal feelings towards some anime can change over time and the more I watch. Given that, I can answer it with what is currently the most possible anime out there that coincides with my criteria.

If I go with the mentioned method, I should as well present the basis for my answer. Using my MALgraph I looked for the average MAL user ratings for all anime, which is 7.43 as I am writing this. I interpret this score as the fine line between what users find kinda-good and what they find kinda-getting-bad. However, I doubt that users always rate anime series in a manner that closely corresponds to how users really felt for each anime. There are ones who seem to enjoy trolling, rating low the ones they really enjoyed, or rating very high the ones they honestly think shouldn’t be recommended for anyone at all. Of course, if users only utilize the rating scale correctly, the real average that I should base my answer upon is 5.0. Every anime rated below that score is bad, and these are the series from which I can choose the one that I enjoyed, despite the overly humbled rating. But that average score cannot be easily achieved, realistically speaking. In the end, I choose the average MAL user rating as my basis.

Let’s go back to the question for this challenge. I can also take the question in two more ways. First, it can mean that I have to answer it with the anime I think is underrated but I genuinely liked. The second is just the opposite of the enjoyment—it must be an anime that, I think and feel, deserved the hate.

Since this challenge can freely be tackled in any way, I choose to shed light on the anime that is both underrated and something I can say that I really liked, regardless of the big hate for that series. 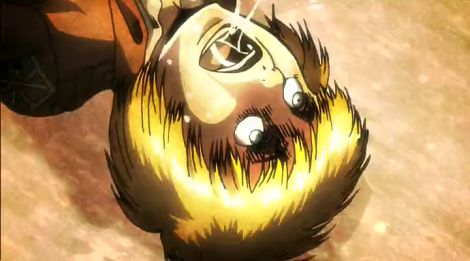 Glasslip may be the freshest low-rated anime out there, having aired last season, being the center of rants from many anime enthusiasts, being the victim (or should I say “victor”?) of the rating landslide game. It’s now rated 5.00-ish in MAL and nobody knows how far the rating will further slide. Regardless, it wasn’t something I enjoyed. Though I don’t really hate it, I feel and think that it’s not even worth the attempts on justifying the whole blandness we were just fed and the heated discussions people pour over the series, particularly to how it ended, since there was too little to talk about it anyway. Thus, it isn’t something that matches my criteria for an underrated anime, for this specific challenge anyway.

Can we get going already? Nah?

Yep. I’ve been going ‘round the bush that it’s already getting boring, huh? But, please, hear me out as my answer for this challenge might have something to do with, or may be already hinting to, my answer. Minus the attempt for comedy, ‘cause the overall tone for this post, as I have realized, is too serious. Anime Is Serious Business (I’ve always wanted to say this at least once in my posts XD).

Finally, here is my answer!

No matter how I think about it, WataMote (Watashi ga Motenai no wa Dou Kangaetemo Omaera ga Warui!—heck, that was long!), rated 7.39, is the anime that I enjoyed watching for various reasons nicely put here. I suggest you read that post before judging the anime too quickly, or even if you’ve already been judging it—or even if you’re simply one of those who could somehow relate to Tomoko’s character but ended up joining the hate bandwagon so you’d be all cool and awesome. But hey, I don’t hate people if they hate, or had come to hate, this anime that I liked. I can see the point why most people would be irked by the repetitive dark comedy the writer throws right at the screen. 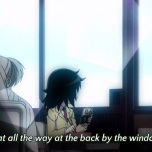 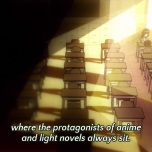 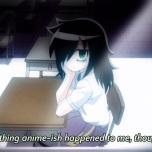 It’s not like I really wanted to be popular or have an anime-like life.

The main reason why I liked the series was how I could see my past self, or maybe some parts of my present self, in Tomoko. As much as how many people would want to hate on her and her clumsy, stupid attempts in making herself (seem or feel) “popular”, I could never bring myself to completely loathe her because I had already established a personal connection to her character, which would be the topic for another post. It’s not that I could entirely relate to her odd behavior and sinister thoughts, though I admit, and am not afraid to, that I myself am a socially awkward person. But I am still working on this aspect of my life, so seeing Tomoko as she was in the entire series made me feel sorry for and empathize with her. Well, of course, I humbly laughed at the lame jokes because the atmosphere throughout the series was just asking for it! Kudos to Oonuma Shin, one of the most brilliant directors in evoking reactions from strong and vivid visuals. It’s also worth mentioning how the voice acting (CV: Kitta Izumi) for Tomoko really drew me in. Yes, it was a strange voice and so not moe at all, but admit it, it perfectly fit the characterization of Tomoko, being the persevering heroine who, nevertheless, suffered some consequences she never wished for. Note that I cannot imagine any other seiyuu (including the veterans) to audition for the role and, maybe, embarrass themselves in front of millions of viewers nationwide. Props to Kitta Izumi for the superior performance!

I personally acknowledge this series as it bravely faced and challenged the typical plots and tropes present in mainstream anime. Needless to say, it isn’t really the anime for the general audience—thus, the negative reaction from the masses. A part of that censure for the anime was because the anime looked as if it was making fun of people with social anxiety disorder, which was never the intention of the show—no matter how much I laughed at it, too—as far as I am concerned. In fact, the series boldly presents Tomoko as the embodiment of that condition, in an attempt to get people notice that there is something like S.A.D. that could be going on in any part of this world. Note that this series is also tagged slice of life, and although it is a work of fiction, it may not be too far from reality. It might even reflect the reality of the difficulties a person having S.A.D. experiences in his everyday life so much better than any previous contemporary work can attempt to.

Yes, I enjoyed Watamote for what it seemed to be and for what it was trying to be. Of course, this judgment is not drawn from purely an objective viewpoint, but I am not ashamed to say this one show is one I probably couldn’t afford to miss.

EDIT: mahouidol also wrote an analysis on the series (on Tomoko). 🙂