I just thought I want to answer E minor‘s survey, despite the fact that I haven’t gotten past Summer 2014 anime backlog. So I guess this is not a valid answer form, but just more of a personal checkup on what my anime watch list this year has been. I just chose some of the questions.

1. What was your overall favorite anime of the year? 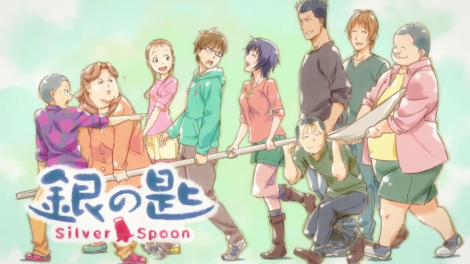 This might not be the general choice, but I think very fondly of Gin no Saji (2nd season). Aside from the fact that I can relate to some of the academic aspects of the show (like food processing), it made a deeper personal connection with me. Hachiken and I are going through the same thing in life–still uncertain of what we want to become or achieve in life, but riding life anyway and enjoying every moment that would not occur again. Instead of feeling all down, the show has given me an optimistic view on how I want to take things from here on out.

2. What was your favorite action anime of the year?

I really liked Noragami, that I even decided to read the manga. I know it’s not that great in terms of the action side of the show, so strictly speaking, it’s not an appropriate answer to this question. But it just made an impact to me that I feel the need to mention it, relying on the fact that it got the ‘action’ tag. Its strong points would be the characters themselves and how much mystery clouds them, especially the gods. Yato is the most interesting character as he’s the most mysterious, in spite of keeping a happy and goofy personality. The story arcs, which seem to be quite discontinuous at first, are neatly written and, in fact, intertwined. You might not see where I’m going with my claims since the anime was really short. Reading the manga might help see my point.

Bokura wa Minna Kawaisou never failed to entertain me. Its story is just simple, but the humorous conversations are what made the seemingly ordinary story quite enjoyable. The characters are all likable, too. Gekkan Shoujo Nozaki-kun and Sabagebu! are mainly comedy shows dressed in high school setting. Like BokuKawai, the characters other than the MC in Nozaki-kun have their distinct antics that are often the tools for the comedy. Sabagebu! liked making fun of itself and of its characters that their episodic troubles are just entertaining to watch and laugh at!

Despite being remembered as a romance-comedy, Nisekoi had its share of serious exchanges between the main players and drama that mainly revolves around the lock-and-key mystery. As you can see, I really ship Raku x Chitoge, even if I’m starting to hate Raku and his thick-headedness and cowardice in pursuing Onodera (which I don’t want to happen anyway) if he REALLY likes her. So every time the series highlights Raku and Chitoge in a serious mood, I can’t help but feel bad for Chitoge, especially in those last few episodes. It’s giving me feels more than it intends to give off.

Nisekoi. Not because of Raku and his chivalry, but because of the main girls, being interesting characters. But what I hate about them is that almost all of them get the same flustered reactions whenever Raku talks as smooth as a polished floor.

Sidonia no Kishi was fairly enjoyable. Gaunas are really scary. I think they scared me more than the titans in SnK did. Becoming a pilot of the Gardes is like wasting your life away. The last two episodes had me gripping the edge of my chair. I look forward to the second season!

Hmmm, there seemed to be an improvement in the relationship between Hachiken and Mikage in Gin no Saji 2! That season was quite the teaser! I wanted to see more of them getting to know each other and finding out each other’s feelings. Baby Steps‘ Ei-chan and Nacchan are so cute together! Oh, youth.

I’ve mentioned Gin no Saji before, but it’s really my favorite this year. Barakamon is also close to my heart.

Haikyuu!! and Ping Pong, but Ping Pong wins in the thought department. It successfully showed how being involved in a sport does not simply mean being skilled, honing one’s skills in the sport, or winning as a proof of improvement and outdoing others. It showed just how much being an athlete does not solely boil down to being talented, but being an athlete and being good at the sport in question is also a matter of personal choice, influence from people one is close to, and one’s own inspiration.

Mushishi Zoku Shou. I love it to bits.

Sabagebu! was the pleasant surprise of this year. I didn’t have hopes of enjoying the show, or rather, I expected to drop it right away after the first episode. I’m glad that it proved me wrong right from the start.

Glasslip was a waste of time. I expected it would, at the very least, highlight some glass art. I guess I put my expectations in the wrong place.

12. Which anime should get a do-over?

Tokyo Ghoul? I heard fans of the manga didn’t really like how the anime turned out. It was too slow-paced for me, too.

13. What was the most memorable scene of the year?

A biased answer: THAT scene in episode 7 of Inou Battle. It’s not only because of Hayami Saori’s excellent voice acting. It’s also because of how unexpectedly looooong that rant was. I wonder if she ever took a break between those lines.

Koe no Katachi TV anime adaptation! I love the manga, although it is difficult to read at times due to the realism in the story, execution of scenes and character acting.

15. And finally, what brings you back to anime season after season, year after year?