As usual, I made my own badge for this thing, featuring Gintoki’s fine ass (not really).

Blog awards seem to sprout from nowhere but I am always happy to receive them. At least I know that my blog gets attention even if I don’t always write something. That said, I had previously put four Liebster Award nominations in the waiting line until now. (And there’s a couple of stuff left for me to do, too.) Sorry for the long wait and thank you for the nominations, my fellow anibloggers: nohbrows of from, imperfection; dandylion13 of Viewers Discretion is Advised; dranimaniacunscripted of blog of the same name; and Ruki of Wanimu! It took me this long to accept your nominations since I thought I’d better save them for the second half of this year, having done the first Liebster 2015 a few days before nohbrows’ nomination. It isn’t exactly my style to do awards consecutively. As I promised (with myself), I wrote stuff to scatter similar entries to make it look like the awards are fresh (when they are really not). Hope I’m off the hook with this excuse?

This is the third time I’m doing a Liebster award, so kindly refer to the first or second one to review the rules, which are pretty simple. Without further ado, here are the sets of my answers:

Perhaps not forever but living in Japan has been one of my fleeting dreams. I wouldn’t mind studying or working there as long as I can gain the experience of adapting to Japanese lifestyle and interacting with the Japanese folks. And, perhaps, I’d learn which things in anime truly represent life in Japan and/or are purely products of happy writing.

Not that good. Heck, I haven’t even taken JLPT of any level so I don’t have a formal basis to answer this. Let’s just say I can read and write all of hiragana and katakana and at least 100 kanji (this is just an estimate, since I didn’t really make something like a list).

Chatting with @frog-kun over a cup of coffee (which I probably won’t even finish drinking) sounds good (read: great). I’ll learn a lot from him about literature and anime analysis, but I don’t know what he’ll gain from me. OTL

I’d also love to meet @FoxyLadyAyame since I’ve (unofficially) become her disciple. When I still had stable internet connection at home we talked a lot via Facebook and, just recently, Skype.

But to be really, really honest it’s a dream of mine to meet as many anitwitters in person as possible. I always wonder how these awesome people differ from their internet personae. The thought of simply meeting the person behind the avatar in the flesh kind of excites me.

The latter. Being introverted and inexperienced in the sort of thing asked here, it’s just natural for me to prefer a closely knit romantic relationship.

I like the anime Hosoda Mamoru has made so far. I also prefer Oonuma Shin’s stuff over Shinbou Akiyuki’s. As for studios, Kyoto Animation always has my attention.

The Giver by Lois Lowry (and Tuesdays With Morrie by Mitch Albom, if I can add another)

Nothing can go wrong with eggs. But sadly I can’t eat it raw even with rice and soy sauce.

Well, I don’t think humans can stand the boredom without art. Because of art, humans have advanced this much. Pretty much everything we do has to have some art in it—plating (from simply serving food), fashion designing (from simply making clothes to wear), architecture and engineering (from simply building homes), food packaging (from simply wrapping rations), and the list goes on and on.

See this. I’m currently fangirling over One Piece.

They grew on me over time and are few of my first anime.

If what you mean by this are Western comics, then I’ve seen some of Archie back when I hadn’t yet entered school. Jughead was my favorite character because he was amusing.

I love many foods. I’m craving for some pizza right now.

Yeah. It was a digital camera.

I can’t name just one. I look up to a lot of people in twitter and in real life because they’re more reachable than the big names on the top of the social food chain. However, I do mental notes on simple people who did great things to show that there is kindness in every human, that we have the intrinsic capacity to love each other.

None right now, but I used to think Batman was cool.

Not really. I used to play checker, scrabble, and chess in elementary school, though. And Snakes and Ladders was a very popular, simple, for-the-fun quasi-board game meant to be played with friends to pass time.

I wanted to share my insights from watching anime and reading manga, but at some point the blog became more varied in terms of content—from anime challenges and first impressions to anime song syndromes and editorials.

I don’t really want to choose between Gintama, FMA Brotherhood, Major, and Code Geass, so…

I’m really bad at recalling “firsts”, so let me just mention that a character death in Fushigi Yuugi left me deeply scarred for life.

Kimi ga Nozomu Eien was a romance-drama series which I don’t recall ever being talked about by many people these days, let alone showered with praises. I heard it was supposedly bad, though I personally enjoyed the drama even if I wanted to slap almost every character. It apparently used to be pretty popular. KgNE probably got more attention than it was supposed to get because of the name similarity of its heroine with the one and only Haruhi Suzumiya.

My waifu is currently Nico Robin of One Piece. The  incumbent husbando is probably Trafalgar Law from the same anime. Hmm. I’m not really sure. I don’t pay much attention and affection to male characters nowadays, though I consider Honda Gorou from Major as my all-time husbando.

Slice of life, I guess, but some of them can be boring and sleep-inducing too

I was pretty much already interested in anime when I saw Dragon Ball, Pokemon, Sailor Moon on TV when I was a mere child. It was in 2009 when I truly got into it when I tried watching some anime, like Elemental Gelade, Fate/stay night, and Tsubasa Chronicles, in Japanese dub and English subs.

I had some breaks from watching anime over the years, but if we still count those months, I’ve been watching for at most six years and five months.

Drawing, listening (and bathroom-singing and air drumming) to music, trying to learn foreign languages (for now I know bits of Japanese) 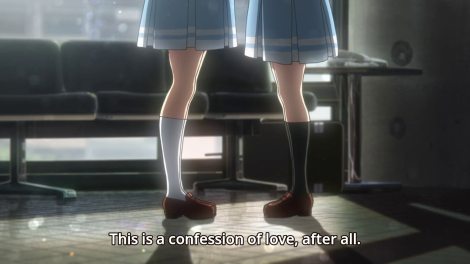 Hibike! Euphonium would probably get a sequel in the near future. A third season wasn’t announced at the end of Sidonia no Kishi 2, so I’m still hoping for its continuation. Also, I’d be overjoyed if I ever hear Gin no Saji getting a 3rd season.

I watch my anime subbed.

I rarely rewatch series, including all-time favorites. Something similar to a rewatch is, maybe, watching those YouTube clips of Nichijou and Gintama every time I’m just in the mood for some nostalgic fun. Or I could just grab my tissues and start crying over Clannad After Story episodes 6 and 18. Again.

I’d been watching anime as they air. However, I got fed up with that habit as I can’t avail to watch a lot of them anymore. Now I’m trying to get back to marathoning completed anime. Alas, I still watch some of the airing series (can’t let myself miss all the fun in discussing airing anime) but I often get behind schedule.

I honestly don’t have an answer to this question.

BLEACH—it turned me into a fangirl.

Miseinen dakedo Kodomo janai vol 1. I bought the original comic in Japanese from a classmate of my ex-tutee at a cheaper price.

It depends on how much I like the song, how exciting the accompanying visuals are, and whether or not I’m watching the anime in marathon mode.

For instance, if I really like the song and I watch the series weekly, then I’d most likely not skip the OP/ED. There is some information in the OP/ED credits that I also want to get when I like a particular episode or whenever I hear a voice so (un)familiar yet impressive but can’t point a finger at the particular seiyuu.

Tekken 5, 6, or any other title in the franchise as long as Lili is a playable character. That said, I haven’t played it in more than two years. *sobs*

Oh yeah, I played some three hours of Left4Dead 2 with high school friends in an internet cafe last month and got hooked.

Ang Pagong at ang Matsing (The Turtle and the Monkey). It’s silly but I grew up reading my coloring story book again and again.

Let me check my MALgraph revived version… Oh, it says I’m least compatible with ecchi anime. To some degree I think my MAL scores are indicative of anything at all.

You are awesome in your own way, but ruling the world will only take your precious time from doing your hobbies! Please think again.

Again, thanks for the nominations, nohbrows, dranimaniacunscripted, Dandylion13, and Ruki!

Now, for the mandatory “11 random facts about me“…

My nominees are Leap250, Bubu-chan, mahouidol, Kai and SakuraNamikaze. Here are your questions (includes the ones I just answered)!