(This is a part of the series of posts, 12 Days of Christmas, done in my own way.)

“Uhhh, which anime to include?”

Seeing a lot of people listing their top 10 shows of the year, I’ve decided to choose my top favorites from this year, too. These titles are ranked rather subjectively–on how much I was emotionally invested on the series, thinking of them or waiting for the next episodes. These are the shows that I’ve really come to love, regardless of the ratings I gave them.

Though the unconventional but dynamic and expressive art and animation initially challenged my perception of anime aesthetics, the beautiful imagery and insightful narrative won me over. Never did I foresee to be so moved by the characters who are so humane in every aspect, battling their inner conflicts and emerging victors of expectations, criticisms, and even some degree of self-hatred.

While earning the labels “escapist” and “incestuous”, NGNL was no doubt one of the easiest to enjoy this year. It’s self-aware enough to poke fun of its own characters, show some but broadcast-safe fan service, and basically just let the world of Disboard get the cast take part in mind-blowing, witty but carefree games. Now to address the hate for this show: This was never meant to be a serious material, was it? 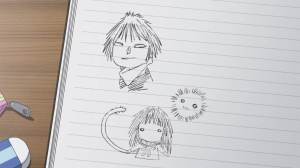 The most humble and yet proud nameless god was an amusing clown in his own show. While it got a little too serious during the Yukine arc, it didn’t fail to entertain me with its seemingly large cast of competing gods and their minions. No matter how hostile they appeared to each other, they were very closely bonded. Is it wrong to find entertainment from the mishaps resulting from Yato’s mischievousness? A god he may be, but he’s close to a human at heart.

P. S. Go read the manga, you will fall in love with Yato, too.

I have poured enough love and hate on this show. Quoting frog-kun:

There’s something strangely attractive about Nisekoi despite it being every harem ever. It’s hard to put your finger on it, though. I guess the series has so many infuriating moments but also just enough charm to keep you hooked.

Barakamon is no doubt a healing show. It doesn’t have a perfect cast. The series simply showed the humble countryside life and how it’s possible to find peace and sense of belonging in a place that is supposed to be desolate, with the people living tens or hundreds of meters away from each other. It didn’t try to hide away the fact that people–famous or not, professional or not–experience a slump at least once in their lives, and that it is not that easy to break that wall. What I also appreciate in this anime is that it never disheartened me, the viewer, because even at the darkest hours there will always be hope–that sometimes we cannot find by ourselves. And that is the reality of living in this world. “No man is an island,” the saying goes. Barakamon’s story is nothing really special, but it certainly has a special place in my heart.

P.S. Perhaps Barakamon is the series that I’ve written the most posts for.

Much of my love towards the show stems from the fact that I, being a food technology student, could actually relate to some extra, educational stuff that it throws. Plus, slice of life stories set in rural/suburban areas always get into my “good anime” field of vision (e.g. Non Non Biyori, Natsume Yuujinchou, Barakamon). Moreover, my inner struggles closely resembles those of Hachiken and, unsurprisingly, of some of the other characters, which made the realizations of the characters hit home so hard that it was difficult to only keep these feels to myself. 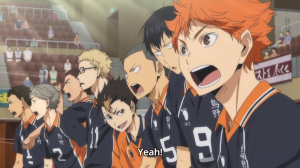 “2014 has been a great year for sports anime” is probably what you’ve already read around, but this is certainly true. Baby Steps is one that was more of the unnoticed shows but deserves more recognition. But Haikyuu!! definitely proves that it isn’t the hype that brought it to the limelight, but the series is great in itself. There’s a lot of reasons to fall in love with this show and, most importantly, the characters–entertaining character interactions, convincing character development, realistic coach-player dynamic, great timing of skits and sense of humor, and valuable insights wonderfully integral to the plot. The highly consistent animation is a huge plus, too.

Started off as a melodramatic school series with hints of romance, it eventually became a big maelstrom of character relations, family drama, and love polygons–with just the right reasons for being so. The experience of watching this series eerily reminds me of how I felt watching Steins;Gate. The first half seemed to go around the place, spouting things such as racism and puberty, but these were all the good things that made the second half a valid mess of a drama. I love it so much, even if my heart frequently hurt. Oh, Miuna, my heart is with you.

P.S. The OST is soooo beautiful and scenic, too, giving me another valid reason to remember this show for the rest of my life.

Heartbreakingly beautiful, the stories of mushi master Ginko’s travels always had that slightly bizarre atmosphere, foreshadowing the puzzling, and oftentimes poignant events of the people that we observe through Ginko’s eyes. The heartaches, although presented in a bit of supernatural fashion, are reflective of our real lives as human beings and how much we have control over our misfortunes and happiness. In the end, I always find myself wholeheartedly and sympathetically wanting a happy ending for every character. If I were to describe Mushishi in few words: It’s beautifully heart-rending.

P.S. There’s a movie coming out next year!

This (not really) new series of Hunter x Hunter is probably the best things that happened in this generation, and to think that it came out only a year after FMA:B ended. It might have seemed a bit childish at first, but that’s a facade to the heavy content and dark themes that are otherwise being discussed by people around the world without end. Even if the colors in this new HxH series are a lot brighter than those in the first adaptation, this remake was even more effective in making dark scenes even more gruesome.

Want to know why people love this show so much? It’s because the thrill was real. The suspense hanging in the air and the twists that occurred here and there made not only the characters’ but also the viewers’ heart racing. Ask everyone who watched the series (obviously, don’t go asking the haters’ opinions) and he’ll certainly tell you, with excitement, the days filled with arrhythmia.