Well, I thought it would be unfair for the other series I’ve been looking forward this season if I didn’t write a not-really-first impression post on it—after that disappointing Working!!! comeback episode. You can call that an excuse for me to write something, but I myself am honestly justifying this with my love for the series in question, Non Non Biyori!

What an apt return. Non Non Biyori Repeat begins with the events that took place right before the timeframe of the prequel. It showed how Miyauchi Rencho—ehem—Miyauchi Renge-san became the first-grader in the entire village. 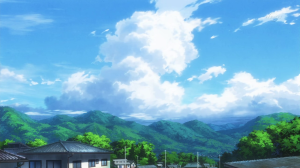 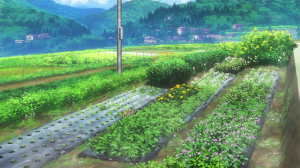 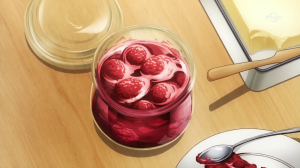 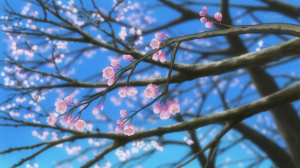 I. Really. Love. This. Anime. It’s calm and peaceful, but it’s never dull. Thanks to the marvelous backgrounds of the greenery, the blues and whites of the skies, and the soothing musical accompaniment that fits the setting. Sound of chirping birds is present almost throughout the episode, which helps paint the picture of some place far from the busy city. The show captures the charm of rural places, that staying in one doesn’t sound bad at all. It has succeeded in making the whole atmosphere personally appealing.

This episode made me feel all warm inside and it didn’t fail to make me smile. It has earned a special place in my heart, for being able to steer my mind away from my preoccupations. Even if it does so temporarily, knowing that I have something this gentle and positive to look forward to is truly more than I could ask for at this moment.

The scene where Ren-chon practiced going to and from the (presumably, or maybe obviously) 105-year old school brought back some memories of when I had my first independent commute-to-school days.1 The window seat is the undoubtedly the best. You take on the view from your seat, and in a matter of days the route is already familiar, making it somewhat easy to spot later on what changes have been made on the landmarks that were once new to your eyes. And look at this face of astonishment from looking at the lush sceneries—something I relate to on a very personal level. I never get bored whenever we take a trip to an unfamiliar town and all I had to see are the hills and trees around. 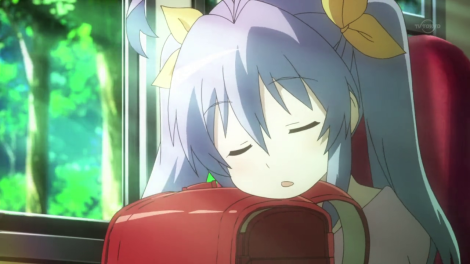 THAT peaceful look. Plus, THAT lovely BGM in the entire going-to-school sequence 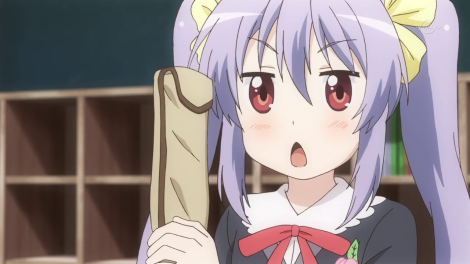 And this is when and how she got the legendary recorder!

I’m really glad they got nano.RIPE again to sing for the OP. This season’s OP isn’t as good as the previous season’s, but it’s nano.RIPE so in itself it is already darn great.2

I’ve said nothing bad about the show, but there certainly are some bad (character) drawings if you pay close attention to the scenes. But those don’t really matter as they didn’t hinder my enjoyment of the show.

If I were to describe my experience of watching this, it’d be like lying on a field of grass and staring at the blue sky and white clouds, with the wind passing by every so often and birds singing on the background, feeling so satisfied and at peace. Yes, just like this:

Aaaaaaaand, we haven’t even heard a single line of “NYANPASSU!” yet.