I’ve been really busy with school since the season started, so I never really got the chance to regularly watch this season’s anime. Fortunately, I had the time to check out the first episodes of some of the shows this season. Once the semester ends, I’ll be able to clear the backlog from this and the previous seasons. Like what I previously did, I’ll just quickly write down what I thought about the shows listed here. 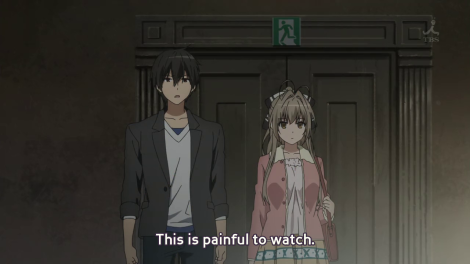 Not that flashy for a KyoAni anime but interesting enough a premise to keep me watching. Pretty designs and animation and cinematography, by the way. OST is beautiful, too. I’m looking forward to listening to those tracks. (Watching)

Too much monologues. Ha ha ha. And too much has been said regarding the show. I just realized how I am not really a fan of the Fate/stay night title itself and that my excitement for the entire show is mainly rooted from my love for Saber. Still, I seem to have a big heart for the show. (Watching)

I like how quite simple the character designs are, but at the same time, not really commonplace. They’re refreshing to look at, just like how unique the setting is. I’m not bothered by the CGI Garo at all! In fact, the shiny armor for this show is better than a dull one done with 2D animation. It kind of delivers superiority of these characters–how they are the main characters and heroes. (Watching)

I cheated. I first saw episode 7 because of THAT scene that made anitweeters noisy. It really made me curious even more when I found out that it is Hayami Saori who voices Hatoko. Because of that, I’ve somehow developed a bias for the show, even if the first episode is a not-so-explosive episode. Characters suddenly getting super powers is not an entirely new thing, but I’m rather interested to keep watching how the characters deal with these powers, which I suspect are granted by someone else–maybe the villain himself, and with their relationships. (Watching)

One of the most hyped anime this season. It looks nice, but the CG background characters might be better off poorly drawn or less detailed 2D. I don’t like the use of dubstep as BGM. It hardly fits the mood of the anime. Scratch that. The use of BGM makes it uncertain of what ‘mood’ a particular scene is trying to exude. The story’s interesting, though. (Watching)

Art-wise and Animation-wise, this is one of the best-looking show this season. I love the colors and the background art. It seems that Sawano Hiroyuki has experimented a bit with his music by adding some Celtic touch, which just suits the setting. Story-wise, it does not really interest me. Also, the character acting is so over-the-top that it doesn’t really help the whole show in carrying itself in a way that would make me like it more. I hope it doesn’t get worse and that it would be less annoying. (Watching)